As a domestic abuse advocate, the trauma women have endured is near and dear to my heart. I have met women who have been raped, molested and sexually assaulted, some by a family member or close friend. As a youth counselor, I have first-hand experience working with human trafficking victims. Girls as young as age 6, can be sold into the sex slave industry, sometimes younger. My heart weeps for those who have suffered any horrific experience. However, these experiences do not define a person and does not determine their destiny.

This leads me to the Amber Rose 2nd annual slut walk that took place on October 1, 2016. Amber rose has created her image on women empowerment, sex and relationships. She seeks to take back the power of derogatory terms such as ‘bitch’ or ‘slut’ and believes women should not be judged by what they wear. She has voiced her beliefs that no woman should be shamed for being promiscuous (if they choose) because by nature they are sexual beings. Although, this is true; by nature we are sinful; It does not mean we should indulge or accept these sinful desires.

In a society that congratulates a man, for getting another notch on his belt but shames a woman for doing the same thing. The truth is, it is not okay for anyone, male or female, to sleep with multiple people. Just because you see others doing wrong, doesn’t mean it’s okay for you to do wrong. Two wrongs do not make a right.

“For this is the will of God, your sanctification: that you abstain from sexual immorality; that each one of you know how to control his own body in holiness and honor, not in the passion of lust like the Gentiles who do not know God”  – 1 Thessalonians 4:3-5

Society has become desensitized to sex because the reality is ‘Sex Sells’. In Jude 1:7 it says “Just as Sodom and Gomorrah and the surrounding cities, which likewise indulged in sexual immorality and pursued unnatural desires, serve as an example by undergoing a punishment of eternal fire.” The cities of Sodom and Gomorrah were destroyed because of sexual immorality and people’s actions against God. The simple fact that God destroyed these cities, or even flooded the earth due to it’s evilness, let’s us know, this is not what God wants for our lives. To encourage sexuality, perversion or homosexuality, is to glorify sin. Our bodies are vessels that hold our spirit, and should be respected rather than lead by the flesh’s lust. The only way to counter these sinful urges, is to seek strength and guidance from The Lord through prayer and His word.

“No temptation has overtaken you that is not common to man. God is faithful, and he will not let you be tempted beyond your ability, but with the temptation he will also provide the way of escape, that you may be able to endure it.” – 1 Corinthians 10:13

It is not empowering for women to call themselves sluts, whores or bitches and it never will be. Instead of trying to change the definition of a word,we need to change the mentality of the individual. By teaching young girls and women not to allow others to disrespect or take advantage of them in any way and ‘no does not mean yes’. This change, starts with how they view and speak about themselves. We should not teach or lead any gender to think it is appropriate to refer to themselves as disgraceful labels simply because God does not look at His creation in that way, so why should we? In life, the more we understand the way God views us, the more we learn about ourselves and our purpose.

Flee from sexual immorality. Every other sin a person commits is outside the body, but the sexually immoral person sins against his own body” – 1 Corinthians 6:18 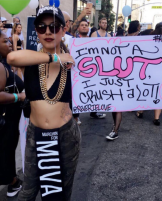 sexual injustice and gender inequality. The Amber Rose SlutWalk aims to impact and uplift while shifting the paradigm of rape culture” according to Amberroseslutwalk.com. While this mission statement sounds professional and uplifting, the reality of the event does not accurately portray it’s mission. There are topless women, pasties and signs with phrases such as “I’m not a slut, I just crush a lot.” It is great that she wants to raise awareness about these situations but it can be misleading to it’s supporters. People may perceive these actions as, it is okay to be promiscuous, dress provocative or refer to themselves in a negative manner, which is not okay at all.

The LGBTQ community is highly respected in the Amber Rose movement. I have been to the Gay parade in New York City, and have several gay friends. I don’t judge them or anyone else by their lifestyle choices, because I know that my sin is no different than the next; However, The LGBTQ community deserves to know God’s truth. This was of living, is a sin in God’s eyes, no matter what opinion or society dictates. Just as lying, cheating or stealing are all sin. There is no sin greater than any; Sin is sin. The SlutWalk event has a surface level knowledge focus and has a need for the acceptance of others. People seek to please people before they seek to please God. I pray that is not you. This movement creates an environment like the Slut Walk, where sinners can gather to glorify their sin; This can’t be pleasing to God because God hates sin.

“For you may be sure of this, that everyone who is sexually immoral or impure, or who is covetous (that is, an idolater), has no inheritance in the kingdom of Christ and God” – Ephesians 5:5

The way we dress and carry ourselves is a reflection of what other’s perceive us to be; Those that believe otherwise are naive, and I pray that is not you. The truth is, if it talks like a duck, quack’s like a duck and looks like a duck; chances are it’s a duck. I think it is wonderful that Amber Rose wants people to be respected no matter what they wear, but in this world, that is not realistic. If you wear a police uniform, would it be weird for people to think you are a cop? If you work as a professional in an office setting, is it appropriate to come to work in pajamas? We have to be mindful at all times, the vibes we send and way others perceive us. If we want to be respected, it starts with our clothing choices. It is not okay for women to be raped or molested due to their clothing, but this is the world we live in; Satan’s playground.

“Put to death therefore what is earthly in you: sexual immorality, impurity, passion, evil desire, and covetousness, which is idolatry” -Colossians 3:5

It is easy to view celebrities as good leaders, because we have grown to adore them but this is where individual wisdom and discernment is needed. Negative words such as slut, whore or bitch should never be used as a term of endearment. A negative word does not have a positive definition. A woman should not dress revealing, if she does not want to turn head turns or gain attention whether negative or positive. The way you dress determines your reputation. It is not okay to sleep with or have multiple partners, just because, guys do it. Male or female, having multiple partners is not how we are created to live. This is why marriage exists. Sex brings incurable diseases, STD’s and unexpected pregnancies. We can not act as if “sex” is not a big deal, because it has big deal effects; Life changing paths. Don’t get me wrong, we all like to feel attractive or receive a little attention from those we admire, but we have to be aware of the difference between good and bad attention. It is possible to be ‘sexy’ fully clothed. It is possible to avoid harmful situations. We have to focus on our soul and inner consciousness, don’t be mislead by the wicked and unbelievers because they lead in God’s opposite direction. Don’t run away from God, run towards Him. #JesusisTheOnlyWay

One thought on “Amber Rose’s Slutwalk”

Connect With The Faith Fam