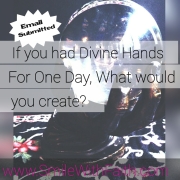 Question: If you were given divine hands to create anything in the world, what would it be?

This is a fantastic question, I had to think for a few minutes. If I had powers to create anything I could ever imagine? hmmm. . . I would create a phone to call heaven Or teleport machine that travels to different universes. I am not sure where to begin because I can’t dream big enough. I would want to create something that would solve worldly crisis’s like global warming or racism.

AHA! I’ve got it !! I would create a ‘spiritual potion’ that would renew a person’s mind, if they drank it and God would reveal himself to those that taste this potion. They would become an instant believer.

This reminds me of Thomas, the doubting disciple:

So the other disciples told him, “We have seen the Lord!” But he said to them, “Unless I see the nail marks in his hands and put my finger where the nails were, and put my hand into his side, I will not believe.” [John 20:25] After Thomas said this Jesus appeared. Jesus took Thomas’s hands so he could believe. FAITH is not an act of risk taking. It is the act of believing God is in control and He acts with purpose.

Connect With The Faith Fam